The Family Folk Machine, supported by a major grant from the Iowa Arts Council, engaged in a songwriting project in collaboration with the Awful Purdies. During Fall 2016 we gathered stories from Folk Machinists, Senior Center groups, and community members using the Story Circle technique developed by the Awful Purdies for “All Recipes Are Home.” In January and February, the Awful Purdies led the FFM in a series of songwriting workshops, using images or phrases from these stories as song seeds. We created ten brand-new songs in our workshop groups! The Family Folk Machine performed the songs at a Senior Center concert on April 30, 2017, and the project culminated in a joint FFM/Awful Purdies concert on Saturday, June 3 on the Main Stage at the Iowa Arts Fest. 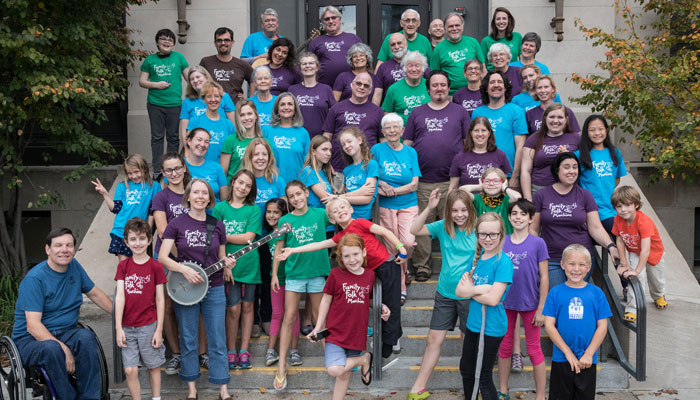 The Family Folk Machine is an intergenerational, non-auditioned choir supported by the Iowa City/Johnson County Senior Center that welcomes kids and adults of all ages and backgrounds to sing together with a folk band. We seek to build community through singing songs with our neighbors, to explore American history and culture through song, to foster individual musical growth, and to pursue excellence as an ensemble. For more information, visit the Family Folk Machine main page.